From the edge of the deck the sand travels away from the light in wavy peaks and shadows. Trunks of palms wrapped in spiral beads of light surround the deck. They sway and rustle in the wind. A few feet away the sand meets the darkness and radiates upward through a cloudless night sky. The leeward side of the Caribbean sea murmurs as melodies float from the bar at the other end of the deck. Large round posts support a thatched roof. They are wrapped with ties that secure decorative linen curtains. Huge garden pots sprout tropical greenery. No cell phones ring. Sounds of soft laughter on the wind are punctuated by clinking drinks returning to the glass tabletops.

A woman walks off the deck and down the wooden stairs into the sand making new patterns in the expanse of creamy grains. She moves closer to the water toward a 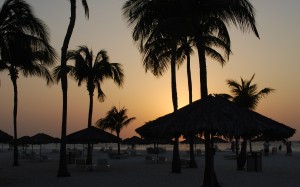 secluded palapa where two people sit at a table dressed in tropical décor. The white linen curtains attached to these posts are pulled across the openings, creating a romantic enclosure. The secluded fantasy presents a dreamy scene where nature and civility, paradise and hospitality meet in harmonious accommodation.

Amidst this hospitable paradise, islanders will tell you that the wind never stops blowing. It suddenly blows across the deck with wild abandon. It knocks over a glass interrupting the laughter of a table of three women. It steals the napkins from the laps of unsuspecting diners and it yanks the linen curtains up and away exposing the amorous diners. The white textiles fly with abandon from all posts in every direction. Indeed, the wild wind in Aruba has never ceased to blow its way through the island and its history.

The wind had no doubt caught the manes of the horses in 1627 as they reared, stomped and twisted at waters edge, spered by their Indian riders as they dared the Dutch sailors to come ashore. Unlike the Spaniards who came before them, these sea-going visitors did not seek gold and riches. The captain and his crew were only in need of water. But the natives now understood the dangers they posed. “Discovery” of these dry, white shores resulted in the death, capture and slavery of Indians who were taken away to work in mines in Santo Domingo. But the Spaniards found no gold and failed to prosper on the island paradise. They abandoned Aruba leaving their horses behind, the descendents of which the Indians now mounted. Having learned the colonizing ways of Europeans, the native inhabitants were now so fierce that the Dutch captain and his crew aborted their attempt to disembark and instead set sail for more hospitable shores.

These days among the tourist destinations of the Caribbean, Aruba stands out as one of the most friendly. Guidebooks proudly announce a distinct lack of racial and social tension. Indeed, it is a multicultural place where islanders speak Papiamento, an extraordinary mix of Amerindian, African, Dutch, Spanish and English all in one. Before I came to this island, I had never thought of it as wild. To me the place seemed long since 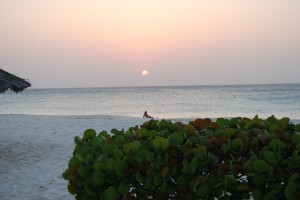 domesticated by mass tourism, the inevitable outcome of a tiny island whose shoreline deposits the iconic sugary sand so desirable to tourists seeking a welcoming paradise. But Aruba proved to me that it was a wild place where some still fight to defend what is left of the riches that were once so abundant. I visited Bucuti Beach Resort, an eco-lodge on Eagle Beach, where nesting turtles are protected and conservationists work to preserve these magnificent wild creatures. Here is their story…

One thought on “Fighting for Wild Aruba”