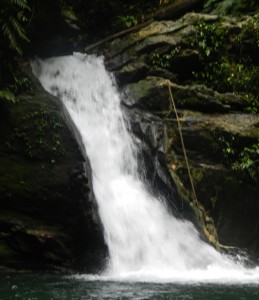 My left hand found a hole in the wet limestone wall and the rushing water came closer as I clamped my fingers into it and moved up a little.  My right leg was still searching for an outcropping, a small indentation, anything my foot could settle into to take some weight off the left quad that was now burning above the pool of white water below.  I nestled my toes into a dimple in the wall hoping to find a bit of horizontal rock so I could use my foot and shift some weight. No way, my toes hit the wall before the ball of my foot found any purchase. At least I was attached with 3 limbs but I couldn’t move. The holes within my reach on the face of this waterfall were too high. I couldn’t position my legs to do the work and push me up. My muscular thighs have always been the strongest part of my body, probably from riding my horse bareback all through my teens. My upper body strength is a different story. My arms would never pull me straight up. I reached my right leg long, almost straight out, and tried anyway, wobbled a little and was still stuck midway up the side of the waterfall.

I looked down over my shoulder to assess the situation. The water in the pool created by the falls wasn’t angry or threatening. In fact it was looking more and more inviting. I had been on this wall for what seemed like an hour, but was probably was less then 10 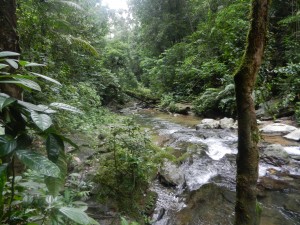 minutes. I could easily push hard away from the limestone and hit the calmer part of the pool feet first. It was plenty deep. There would be no headline in the travel section reporting, Frommer’s guidebook writer fatally injured in a climbing accident in Trinidad. As it turned out I didn’t have to jump.

This Trinidadian adventure has come back to me while I am sitting in an airy, whimsical restaurant waiting to interview the owner Alvin Clayton, who is from Trinidad. The walls are covered with Matisse inspired paintings. I’ve heard he did them all. It’s quite an oeuvre.  He named his restaurant Alvin & Friends because, after all, isn’t it nicer to share a meal with friends than eat alone? I’m not the first writer to come through these glass 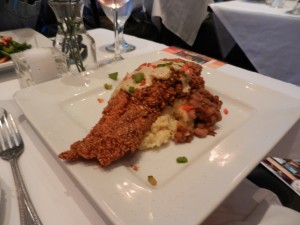 doors that open invitingly onto the small plaza in front. A New York City anchorwomen Sade Baderinwa, came all the way up to the suburbs to get a taste of Alvin’s Po Boy sandwich. I’m intrigued by what I’ve read and the local buzz that surrounds this place. I might be missing Trinidad a little too.

The manager looks embarrassed and tells me Alvin’s been delayed. He offers a rum punch and I’m happy. Almost every review includes the detail that Alvin got into the business when he partnered with Denzel Washington and others, to open a restaurant in Los Angeles called Georgia. On the south side of Melrose, It became a celebrity hangout and lasted for seven years. That was his first experience with the fusion cuisine that merges Trinidadian cooking with the favorite recipes of the American south.

When Alvin walks in I recognize him from pictures and his reputation as a former model. 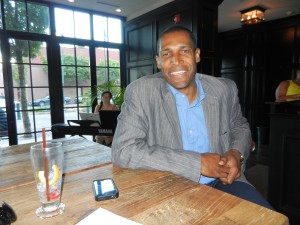 The man couldn’t take a bad picture. While we chat he adjusts the sound system with his cell phone, altering the volume and music, and changing the mood of the restaurant. He tells me, “If the music is wrong it’s just any ordinary place to eat.” The demi-walls of paneled glass that evoke the feeling of openness and seclusion at the same time are also his design.

In Trinidad, where steelpan drums originated, I began to loose track of how many different people and cultures passed through, stayed, or somehow left their mark on the island. Exploring the Caribbean gave 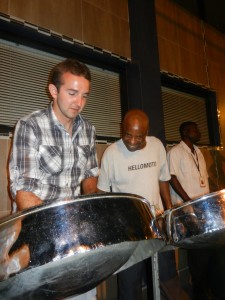 me a real taste for the mashup of people and history that is so much a part of the islands. The early history that created these fusions wasn’t so happy, especially after the arrival of Columbus, who encountered Trinidad in 1498. Beginning in the 1530s the Spanish were bent on conquering the Arawakan and Cariban speak peoples, and like most of the inhabitants of the Caribbean after colonial contact, they were very nearly wiped out. For the next 4 centuries, as Europeans vied for arable land, wealth and resources, different waves of peoples and cultures tossed up on Trinidad’s shores. By 1595 Sir Walter Raleigh (who introduced tobacco to England) showed up to attack the Spanish in his quest for El Dorado – the famed “City of Gold.” After the French revolution the arrival of plantation owners and their slaves from Martinique led to an agriculture-based economy of cocoa and sugar. But Trinidad remained a Spanish colony until 1797 when the British fleet sent 18 warships to take the island away from the Spanish.

The abolition of slavery on Trinidad in 1838 presented a problem for the powerful plantation owners, who then devised a system of “indenture” for Indian workers. From 1845 to 1917, they brought almost 150,000 East Indians to work on the sugarcane 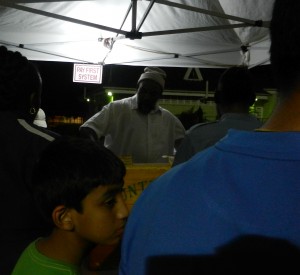 Today Indian food is a major ingredient of Trinidadian cuisine. The first thing I ate when I got off the plane was a Roti. I remember the smells and smoke from the vendor’s carts on an evening walk through Independence Square in the heart of Port of Spain where the classic “double” was in great demand. We waited in line to be served the hand-held treat made of coco bread and stuffed with curried chickpeas and a little hot sauce.

I am reminded of the smells and sounds of Trinidad having dinner at Alvin’s after my interview with him. What a great adventure it was all around. I finally did get off the waterfall, by the way. I grabbed the rope attached to the top of the rock wall, held onto it tight with both hands, and walked straight up the rest of the wet limestone, all the way to the top. The really fun part was coming down!